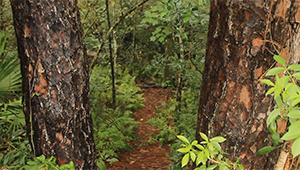 The Greenwood School / Jacksonville Zoo Nature Trail Project is complete and the grand opening, complete with ribbon cutting ceremony, is scheduled for September 27, 2014 at 9:30 am at the Jacksonville Zoo.  Come out and support Greenwood’s amazing Zoology Club students as they unveil their latest citizen science project.  Students will conduct  tours of the new Nature Trail and afterwards will be guests at a luncheon given in their honor.

The  Nature Trail project was the brainchild of Ms. Krug and her Zoology Club students who realized that people did not spend much time in woods anymore.  After successfully completing a nature trail project on the Greenwood campus they wondered if it would be possible to replicate the success of that project at the Zoo noting that, “a Nature Trail would be a perfect compliment to the Zoo’s Natural  Florida Exhibit which focuses primarily on animals.” The main purpose, according to Ms. Krug is that, “a Nature Trail would provide Zoo visitors with the option of walking through a natural area and experiencing what it is like first hand.”

Partnering with the Zoo, Greenwood Students  set to work in an undeveloped area previously used for overflow parking.  They marked off the trail with colored string and  began the process of carefully clearing enough scrub and underbrush to allow a pathway with a few open areas. A year later the project is complete and the students are looking forward to showing off their handiwork. In addition to the actual trail building, students conducted original research and documented their observations. Some of the things they uncovered include wild pig tracks and scat, various species of woodpeckers, numerous native plant and insect species as well as reptiles and amphibians and a wetlands area complete with a stand of bald cypress.

The students are thrilled with their success in undertaking this project and one student noted that she felt  like she “really contributed to the community by being part of the Nature Trail project.”  Next up on the Zoology Club horizon – Tree Frog Monitoring and the Bud Burst Project,  which is a monitoring plan to determine the effects of temperature change on plants.  Way to go Greenwood Zoology Club!